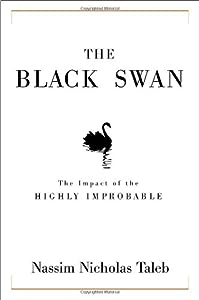 I am reading a book called “The Black Swan” by Nassim Nicholas Taleb.  The book is about how we tend to rely on a simplified view of of the past.  We focus on facts that conform with our values.  To do so we create narratives/stories which in turn support a distorted view of our present and future. Rather than enhancing our understanding, they leave us vulnerable to facts that are not consistent with our values and therefore not considered. By our nature, the manner in which humans perceive reality tends to support our existing biases, thereby placing us at greater risk  for the unconsidered and unknown.

We interpret empirical evidence in a selective manner, focusing on facts that support our existing worldview while ignoring other facts  that do not.   We ignore facts that don’t support our hypothesis.

Taleb argues that we suffer from a delusion of perception and then fall victim to “black swans” — unexpected and consequential random events.  When such events take place, we explain them away so that they conform to our existing  model of reality.  He argues that  not only do we fail to predict such events, when they occur we explain them away by focusing on facts that support us while ignoring evidence that does not.  Taleb argues that we can only attempt to minimize our vulnerability to unforeseen and consequential events (i.e., market crashes) by enhancing our “robustness” and ability to withstand them..

In one of the chapters, Taleb discusses “the madman’s narrative”.  He describes it as the propensity of people suffering from paranoid delusions to take the most innocuous and minor events and construct them in support of a theory of conspiracy.  Ten people suffering from paranoid delusions will all come to the same conclusion of a conspiracy through constructing completely unrelated facts.

From a family law perspective, one continually encounters the madman’s narrative in practice.  The narrative of past events is constructed at a time of emotional distress for the client and the other party.  People in confused and vulnerable states often provide a narrative that focuses on  understanding what motivates the other party.  They want to “make sense” of what has happened.  In doing so, they impose a narrative on the set of facts that is consistent with his or her own theory of events.

will feed the false or biased narrative — believing in good conscience that their job is to advocate the client’s narrative, rather than advising the client more broadly, and focusing on the client’s interests.  Other lawyers will simply ignore the client’s view of his circumstances and impose their own biases, and using their experience as a justification for doing so.

Lawyers, too, come to the practice of family law with biases and often simple minded constructs through which to view the reality of their client’s cases.  Experience must be countered with a skepticism and an imagination  that not every case is the same. Experienced lawyers may be bring over 20 years of “experience” to their family law clients, but that may not be of much value if the client’s experience is ignored and replaced with an equally unrealistic model  of the lawyer’s making.

I advocate on behalf of a client while retaining a healthy skepticism for that client’s benefit.  That same lawyer should appreciate the limits of his or her own knowledge, while listening and observing with an open mind.   The same skepticism should be applied to any belief that the lawyer’s are necessarily right for the client.

At the end of the day, it is the client’s case and the client’s choice on how to prosecute it.  He or she is entitled to a lawyer’s experience, knowledge, skepticism and imagination.

Call or Submit Form to Book Your Consultation

Call to Arrange a Consultation